But, before diving into Hola and Netflix let’s first know…

What is Hola VPN?

Hola VPN is an Israel-based company and was founded in 2007 by Ofer Vielnski and Derry Shribman. It is one of the best freemium VPNs over the internet which uses a peer-to-peer network. It is a kind of virtual private network and lets you use and watch geo-restricted content.

Hola VPN And Netflix: Does Hola VPN Works With Netflix?

Yes, Hola VPN does work with Netflix and also opens the US Netflix library. It promises its users to help them in accessing Netflix content. However, not every VPN can unblock Netflix content easily as Netflix uses strong firewalls and encryptions that are hard to break. But Hola VPN can unblock Netflix and along with many other geo-restricted contents as well. But there is one problem you have to deal with while streaming Netflix with Hola VPN. You have to log in every time you change the region to watch more content.

Well, Netflix is one of the most demanding OTT platforms. It does not necessarily block a VPN there is a reason behind it which is the agreement that they have with the content provider that they will only show their subject in a certain geographic locality.

How Netflix identifies a VPN Server?

What a VPN provider does is that they give another IP address (mainly one of their servers) to its users for accessing the Web. The same IP address is repeatedly used by many users to access Netflix content. If Netflix VPN blockers identify an IP being used by multiple users then they block that particular IP address. This is how Netflix identifies a VPN server and that is the reason Hola VPN is good for Netflix as it uses the P2P server which they swap IP address with one another instead of assigning the same IP address to everyone. 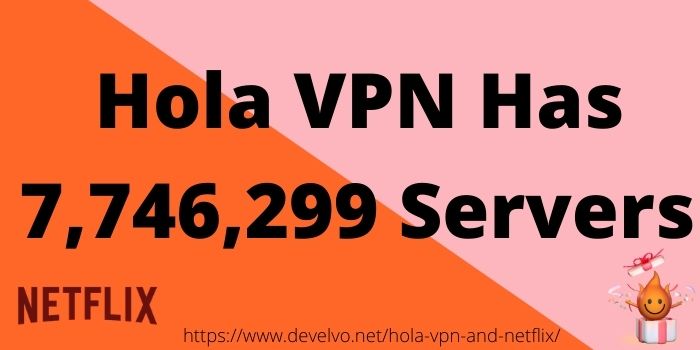 Hola VPN comes with three plans Hola VPN free, Hola VPN Premium, and Hola VPN Ultra. There is also a Hola VPN new version that is the desktop version. After installing this version on your PC/Laptop it will add a chromium-based modded browser into your search bar. Although Hola VPN provides extensions for chrome, opera, and Hola VPN firefox.

Does Hola VPN free version support Netflix? The answer to this question is yes but it only gives you a one-hour session per day. To watch more of Netflix content you will have to upgrade it to its Hola Premium and Hola Ultra plan you use the Hola VPN coupon code to get exclusive offers and discounts.

Sometimes you would have seen this error while connecting Hola VPN with Netflix this may happen because of these reasons:

We’ll be very straight to you on this question. If you are using the free version of a Hola VPN it will only mask your IP address and unblock geo-restricted content it will not encrypt your traffic data. To get more security and features you will have to upgrade your plan in which you will get a strong no-logs policy, strong encryptions, etc.

So, it is suggested to upgrade to any of the paid versions of Hola for safely accessing Netflix.

After all this research we have found that Hola VPN is good for Netflix and opens up Netflix Us library easily. Its free version too supports Netflix and to watch more upgrade to Hola VPN plus.

We will be happy to hear your thoughts

Deal of the day

Start Your Own Website Today With BlueHost WordPress Hosting

What is KnownHost KVM Cloud Hosting?

Get BlueHost Domain Name | Know All Features Of Blueshot

How to login to Hostgator?

Why Choose BlueHost Web Hosting? Get Answer In Detail!

How Much Does a Bluehost Domain cost?

Bluehost Customer Support | Is It Good Or Bad?

We are here providing the quality and almost accurate information regarding BlueHost web hosting. We tend to bring the genuine queries and its answers to provide the best experience and understanding about BlueHost Web Hosting.

You Have To Know

We are doing the affiliate marketing of BlueHost and other similar web hosting service providers. So, you will be eligible to steal the best deal available in the web hosting market.

We do share the information on the basis of the third party affiliation. We are not if any changes done regarding any specific deal and offer.