Camtasia Studio vs Wondershare Filmora | Which is Better for Editing Videos?

Camtasia and Filmora, are both considered among the top video editing software. Both of them provide some handy tools, using which videos can be edited with ease. However, among users, Filmora is much more popular than Camtasia.

Through this head-to-head Camtasia vs Filmora comparison, we will try to find if Filmora is better than Camtasia or if they lie in the same boat. But before moving towards the comparison, let’s have an overview of both software.

Is Filmora any good?

Filmora is a product of Wondershare and is one of the most powerful video editing tools, currently available in the market. By using this software you can quickly edit videos whether you are a noob or a pro. This software is also used and recommended by many professionals.

Is Camtasia good for video editing?

Camtasia is a product of US-based software company TechSmith. This software is primarily known for its ability to record on-screen activities. Camtasia also comes with some intuitive tools that can help you to edit videos easily. You can choose the other software of TechSmith too. Snagit uses for creating short videos and is good for beginners. After reading the comparison of Snagit and Camtasia We say that Snagit is a better choice for newbies.

Besides this, Camtasia is also best because it provides amazing discount offers to users. Such as you can apply the coupon code of Camtasia to make massive savings on your purchase.

There are lots of things that you can find in common between Camtasia Studio vs Filmora like:

So, these are some of the major similarities between Filmora and Camtasia. But the Filmora and Camtasia system requirements are quite different. and Filmora vary from each other. However, there are many aspects where they differ, and they are mentioned further.

Camtasia Vs Filmora: Comparison Of Features

Both Camtasia and Filmora provide some amazing video editing features. Here, we have compared some of those features for you:

It is very easy to start working with both Camtasia and Filmora. However, Camtasia is a documentation software and besides this, it can be used for creating educative/instructive videos. This software can be worth it for you if you are a teacher or want to use it for webinars or presentations.

It is a professional video editing software and is also used by many YouTubers. However, the use of this software is limited to documentation purposes only.

Camtasia can also be used for capturing videos in real-time while editing videos. Through it, you can either record your on-screen activities or capture videos from Webcam.

Filmora doesn’t support video recording. The only way to work on a video is by importing it from a device or from other apps.

So, Camtasia is good if you want to make tutorials, or making presentations. Otherwise, you can opt for Filmora.

One of the biggest advantages of using the Filmora is that it supports the use of keyframing. In this way, it helps users in creating frames perfectly and draw professionally. Whereas, with Camtasia, you will find this feature missing.

So, if you want to give a professional look to your videos then using Filmora is better.

Camtasia doesn’t provide multiple options to use its support team. If you ever feel stuck while using this software then the only way to contact the support team of Camtasia is through the mail.

In terms of support, Filmora provides a better option than Camtasia. You can contact the support team of Filmora 24/7 through Emails, Live chats, and Tickets.

However, the support team of both the software is capable of solving the queries of users. 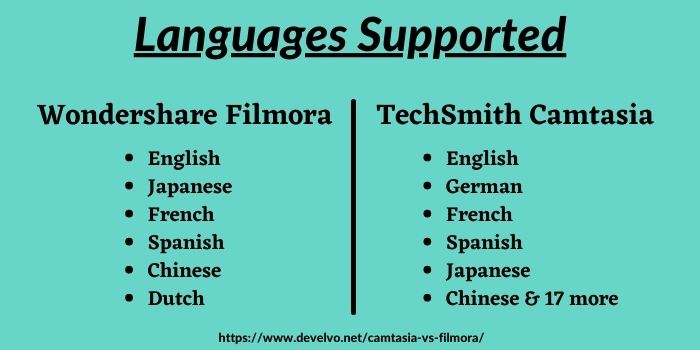 The Camtasia studio software supports integration with various kinds of software including PowerPoint, TechSmith Snagit, along with some other apps like YouTube, Vimeo, etc. Whereas Wondershare Filmora doesn’t support such kinds of integrations.

So, these are the major attributes that you may find different between Wondershare Filmora vs Camtasia.

How much does Camtasia cost?

If you want to enjoy the services of Camtasia then you have to spend a huge amount. Camtasia doesn’t provide any subscription-based plan; the only way to enjoy its services is by choosing its perpetual plan. The Camtasia Price of its lifetime license is $249.99 for both Windows and Mac licenses. By using Camtasia Discount Code, you can save huge bucks on this software.

What Is The Cost Of Filmora?

The pricing structure of Filmora is far better than Camtasia as it provides monthly, yearly, and lifetime licenses. And its pricing is as follows:

These are the pricing of both of these software. This shows that Camtasia is way more expensive than Wondershare Filmora. And choosing Camtasia is only suggested if you want a software for Webinars, Presentations, Meeting recordings, etc. You can now grab a heavy discount on the newly launched Filmora version with Filmora 11 coupon code.

Is Filmora for free?

There is an available Filmora free version, and you can use this version as long as you want. But this version comes with some limited tools and also includes watermarks.

Can I use Camtasia for free?

Camtasia doesn’t provide any free version. However, you can find a Camtasia free trial version and this version will last for only 15 days. This version also restricts commercial usage and can only be used for reviewing purposes. You can do the Camtasia download of this version from its official website.

Camtasia or Filmora: The Bottom Line

Through this comparison between Camtasia vs Filmora, we outlined both the major similarities and dissimilarities between this software. Both the software provides amazing features and can let you do work efficiently.

Related Articles
We will be happy to hear your thoughts

How To Get Bluehost Shared Hosting Plan?

What is KnownHost KVM Cloud Hosting?

How Much Does a Bluehost Domain cost?

How to login to Hostgator?

What is VPS Server? Get Answer In Detail

How to Change PHP Version in HostGator?

We are here providing the quality and almost accurate information regarding BlueHost web hosting. We tend to bring the genuine queries and its answers to provide the best experience and understanding about BlueHost Web Hosting.

You Have To Know

We are doing the affiliate marketing of BlueHost and other similar web hosting service providers. So, you will be eligible to steal the best deal available in the web hosting market.

We do share the information on the basis of the third party affiliation. We are not if any changes done regarding any specific deal and offer.